Hi! I have released a new version of Yorg! Let's talk about the new features.

I have implemented local multiplayer. Now, you can play with your friends on the same computer. This is implemented using split-screen.

Yorg is developed using the latest version of Panda3D (see later for details). This provides us a lot of intriguing features. The first one is the support for joypads. Now, you are not constrained to keyboards: you can use your favorite controllers. This is a new feature of Yorg (and Panda3D): if you observe any problems, please let me know.

Another awesome feature of the new Panda3D is the improved support for shader-based particle effects. I have implemented some particle effects (skidmarks, weapons, sparkles), but they are not definitive (actually some of them are pretty ugly tbh). I would love to improve them in the future, anyway here is a first implementation. 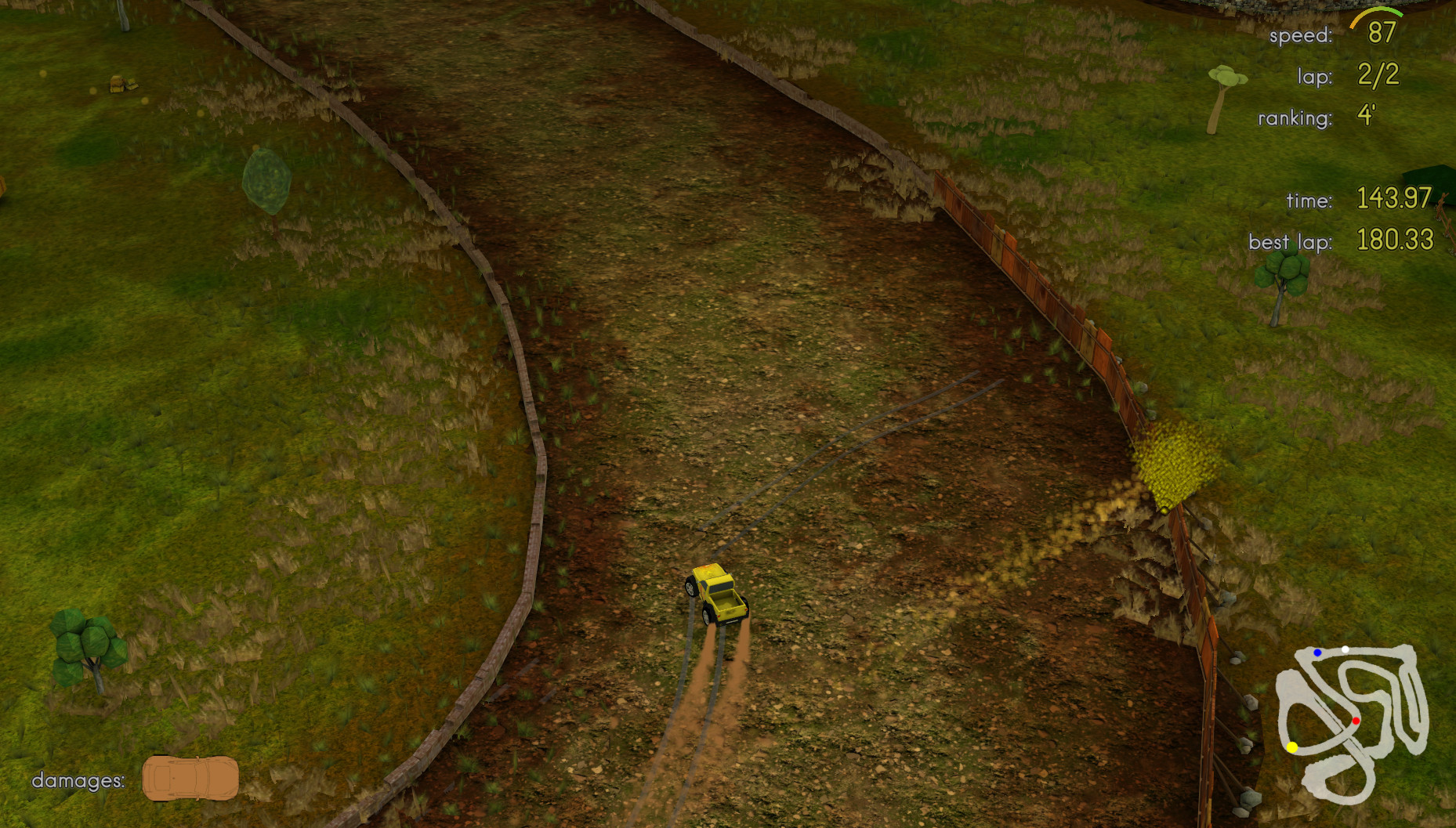 I received some important constructive criticisms about the previous online multiplayer's GUI. So, I have revamped it: now it should be clearer. A lot of thanks go to Gaming On Linux for reporting my bad implementation!

I have received several contributions. Specifically, I have updated these translations: Scottish Gaelic, Spanish, Galician, French and Italian! A lot of thanks go to GunChleoc, Leandro and xin!

The iterative approach of Yorg's development implies that I can improve some aspects at each release. Panda3D's new version provided some huge performance improvements: I am sure that you will be very happy about their hard work. Then, I have changed some sfx. Moreover, I have fixed some bugs in the AI (it is not very good yet, let's improve that in a future release). Finally, I have tuned the driving model: I hope you will find driving more fun (anyway, I should still improve it in the future).

A lot of work has been allocated on keeping Yorg modern. Panda3D 1.10 is an awesome release: they have implemented many important features (Setuptools-based deployment, huge performance improvements, gamepad support, better shader support, ...). I humbly try to use Panda3D the best I can. Moreover, I have ported the entire codebase to Python 3.

Please, consider the online multiplayer as experimental. It should work (there are no known bugs). But, when the server is overloaded (as instance, when it is building a new version of Yorg), Yorg's server process may be killed by Linux's OOM killer. Unfortunately, I can't buy more resources for the server, and I use it for several things (building pipeline, Yorg's game server, Yorg's related projects, ...). While I constantly hope to get more resources from our Patreon campaign to improve the situation, I should refactor the server code to get it lean (so, I can get the server more stable even with low resources).

Huge thanks go to Leandro for testing and for his competence. He gave me many suggestions for improving Yorg. If you find Yorg a bit better, it is thanks to him.

Other huge thanks go to the supporters: I couldn't even face the basic costs of this project (hosting, VPS) without you. If you can still see any news from this project, it is because they are so generous.

Here is the quick changelog: